Jesus said, “Let the little children come to me, and do not hinder them, for the kingdom of heaven belongs to such as these.” Matthew 19:14

It’s the line of scrimmage. Sweat is dripping, hearts are pounding. Tension is high. No-one dare moves. No room for penalties; no room for error.

The call is made.

And we’re off. Well, he’s off.  I’m not allowed to rush or dash or blitz and I’m pretty sure that at least one of those is not even a real football word, but to sum it up, I can’t run toward him (rushing) and I can’t chase after him (dashing) and I can’t blitz (whatever the heck-0-la that means).

He’s the snapper (which is the guy they use when it’s close) and the center (the guy who snaps it when it’s far away) and he’s the quarterback and the receiver and the running back. He throws the ball high (to himself), catches it, runs and scores.

Are you catching the pattern? When he kicks, it’s a field goal. There are points involved. But for some reason my kicks are considered kick-off returns and I don’t get points.

Every afternoon, it’s football at the Hale-Fritz home. Emma Claire sometimes joins is, but mostly she  just pulls up a chair and becomes part of the “audience”. We pause for a half-time show and then it’s back to the game and I secretly wonder— 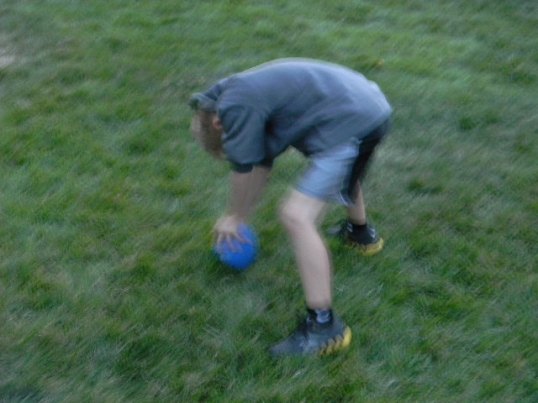 But they say it’s the grass. It’s the house. It’s perfectly tucked sheets and hangers all hanging in the same direction and a floor free of toys and dolls and strollers and counters with no play dough and ice makers with no legos (OK, even I can admit that one’s a little weird) but we don’t just build legos and put them on a shelf. We play with them. We don’t just roll out play dough. We make ice cream and cupcakes and we put sprinkles on top and we serve them and we save them and I thought it was the time but  now you’re telling me it’s the grass.

Seriously, who THE HALE cares about the grass?

Well, maybe you care,  but ask my children.

Ask my children if they care about the grass.